The Justice for the Peace – Island Tour brings Peace River Valley farmers Ken and Arlene Boon to Sooke on the night of Thurs. March 22 as the pair and their allies push back against the BC government’s decision to green light the Site C hydroelectric dam. 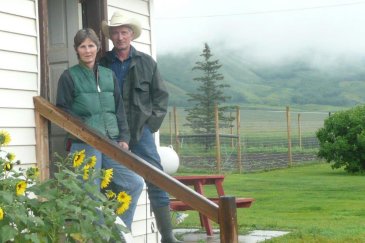 The Boons will be joined by Jackie Larkin and Steve Gray, moderators of Victoria’s Site C Summit on the Jan. 27 weekend.  That gathering of more than 200 individuals from a broad range of groups — First Nations, environmental, academic, energy consultants, number-crunchers and experts such as Harry Swain, chair of the Federal/Provincial Joint Review Panel on Site C —  concluded that “the NDP’s cabinet action (to proceed with the project) was based on erroneous advice.”

Sooke’s “Mini Site C Summit”  will take place downstairs at the Masonic Lodge, 6544 Throup Road, from 7 to 9 PM. Admission is by donation with all proceeds going to the Peace Valley Environment Association and the Peace Valley Landowner Association. The evening, one of six on the Rolling Justice Bus Vancouver Island Tour, is co-hosted by Awareness Film Night, the Sierra Club of BC and Transition Sooke.

The Boons are third-generation grain and hay farmers whose 400-acre property is being expropriated for a Site C-related highway realignment that goes right through their house.

With their home, livelihoods and the richly fertile Peace Valley at stake, the Boons have campaigned against the project for nearly a decade. They continue to rally against a Dec. 11, 2017 decision that was a shock to BC NDP and Green Party of BC supporters who expected the now nearly $11 billion project to be shelved following the November release of a BC Utilities Commission analysis packed with red flags.

“Mainstream media and half the voters of BC refuse to see the obvious,” says Ken Boon. “But we’re hoping to change that. Overwhelming evidence makes it clear that the dam makes no sense financially, environmentally or ethically.”

The Rolling Justice Bus tour ends in Vancouver on March 27 for the start of a new chapter in a court challenge by the Treaty 8 First Nations alliance from the Peace River region. The group is arguing that the dam is a breach of treaty agreements. 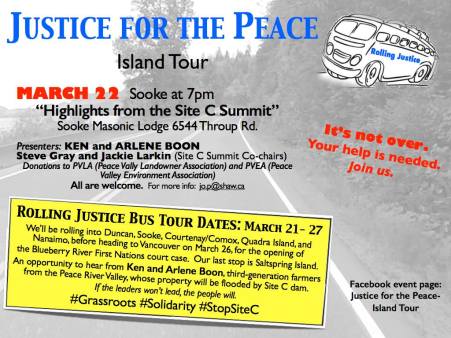